Trouble seems near as a police inspector, named, Hosea Yakubu, was claimed to have been beaten to death by soldiers at Eleme Petrochemical gate, Port Harcourt, Rivers State.

Trouble started when the deceased police officer, Yakubu, was reported to have drove against traffic while on patrol duty with his two other colleagues on August 16.

Yakubu’s brother was revealed that his brother and two other officers were coming back from a patrol duty, decided to drive against traffic in order to beat the traffic along Eleme road.

The deceased police officer was believed to have been beaten to death by the soldiers attached to the Petrochemical company. Yakubu’s brother said that when his brother got to the gate of the company, a man on mufti, that his brother didnt know was a soldier, flagged them down and challenged them for driving against traffic.

This resulted in an argument between the police officers and the soldiers which got one of the soldiers upset an slapped the driver. The brother to the deceased officer, further disclosed that, the slapping of the police officer made the late police officer alighted from the patrol vehicle, to challenge the soldier for slapping his colleague, this further heated up the argument, with other soldiers joining in and to start a fight.

Yakubu’s brother said that his brother was hit on the head with a thick plank by one of the soldiers until he fell to the ground and became motionless.

The late Yakubu was taken to the University of Port Harcourt Teaching Hospital (UPTH) for urgent medical attention, unfortunately, he dead at the hospital after a day at the hospital, said his brother.

The deceased police officer said: “My brother and two other policemen drove one-way because of hold up. When they got to Eleme Petrochemical gate an Army man on mufti stopped them and they started quarrelling and later started fighting,” 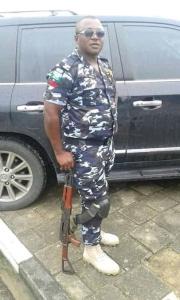 “One of the soldiers who later joined the fight and used a thick plank to hit my brother’s head and he fell and couldn’t move.

“He was subsequently rushed to the nearest hospital from where he was referred to UPTH and admitted at the ICU.

“After 24 hours on admission, he gave up. Up until today, neither the police nor the military have said anything or taken action to bring the culprits to book.”

The Nigerian army is yet to respond to this incident. Now Is the Time to Think About Your Small-Business Success

Fuel Price And Electricity Tariff Hike: No Going Back On Our Planned Strike And Protest...

The Next Wave of Superheroes Has Arrived with Astonishing Speed